The DRK spreads lies about what they did in WW2

Like most Americans, I'm fascinated by WW2. Even moreso cuz I live in Germany and see signs of it regularly.

Germans don't like to talk about it. They have their museums and tributes and apologies and a little plaque outside every building whose residents were evicted and killed. On the surface they've come to terms with it, but deep down, hm......

In 14 years here I've never noticed anyone omitting or tweaking information about that war. Until today.

In a class full of adults (and one teenager) we learned about the German Red Cross's history (DRK).

When the teacher got to WW2, he had *one* thing to say, one slide, that said, "The DRK helped civilians in WW2."

That was it. I fruck out. I don't want to be a negative person but that is a massive lie of omission. I started trembling because I knew I could not just let it go, and it was not going to be a pleasant topic. But I couldn't let this class of intelligent adults spend the rest of their time with the Red Cross thinking that about the DRK.

Suddenly the teacher got up and left the room and I got a little emotional and turned to my fellow students and said, "Victims. What did the DRK do to help the *victims* of WW2?" The entire class went silent and they stared at me.

I continued, "What did the DRK do in WW2, as a NAZI ORGANIZATION?"

Now they were really staring at me. As you know, the Red Cross's mission is to help victims of war regardless of what side they are on (examples: trying to help both sides in the Italy/Ethiopia war (ha!), and actively helping the Taliban over several years). Our Prime Directive is neutrality in offering aid.

This guy named Markus said, "No, the DRK helped everyone equally in WW2." omgosh, he's completely ignorant of the truth. And he's a longtime DRK member!

Wouldn't you ask? If you were a member of the Red Cross in Germany, wouldn't you ask, "So, how *exactly* did we help the helpless during WW2?" Honestly? You just assume we helped, like any other time in history? 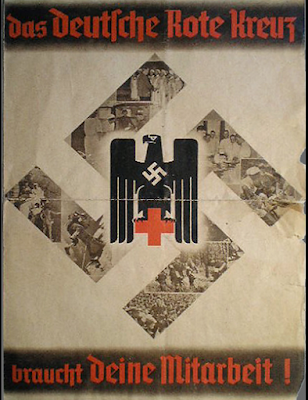 This poster says, "The DRK needs your help." As a member of the DRK this poster makes me sick. They literally asked for people to volunteer with the German Red Cross to help exterminate undesirable people.

I'm emotional about this because it's my first exposure to Germans glossing over atrocities. I'm not even Jewish. (Though looking at a Jewish history website, they're pretty mad at the DRK too.)

I continued, "The DRK was not allowed to be a Red Cross member for SEVEN years." So this 160 year anniversary they just celebrated is actually only 153. "They had to re-apply for membership after the war in 1952."

I said, "What Internet have I been reading?" I said that quite humbly because I know Wikipedia is not always correct.

Then the teacher walked back into the silent room.

Markus immediately said, "Klaus, is it true that the DRK was affiliated with the Nazis?"

Klaus was taken by surprise and obviously dreaded having to answer this.

He took forever and finally collected himself and said, "The German Red Cross shares guilt with the 3rd Reich for what happened in WW2."

Then he elaborated in an extremely politically correct way - the shared blame in the holocaust, but he never got to darkest truths.

The DRK was taken over by Nazis whose loyalty to Hitler far surpassed anyone else on the board of directors at DRK. All the Jewish members of the DRK were let go.

The DRK members began their training in new basic Nazi concepts, such as racial hygiene, foundations of genetics, the biology of inheritance, and how to give a proper Nazi salute.

Before complete Nazi takeover of the leadership of the DRK, a Nazi representative made a speech at a DRK meeting including:

"The Red Cross is something like the conscience of the nation. ... Together with the nation, the Red Cross is ready to commit all its strength for the high goals of our leader, Adolf Hitler"

The leader of the DRK at the time professed loyalty to Hitler, but apparently he wasn't loyal enough - they replaced him with someone who was.

After the war, the Allies broke up the DRK.

Closing the discussion on the topic today, our teacher Klaus said, "We applied to the ICRC and said we'd like very much to be a Red Cross again, please."

The ICRC (International Committee of the Red Cross, the parent organization for all nations' Red Crosses) feels guilty. But in my opinion they don't have to. They did what they could to try to talk to the DRK but DRK shut them out. Of course they could have done more, but they were being lied to (they were invited to visit a "model ghetto"!?)

ICRC, "Hey, German Red Cross, what's goin on up there?"

Link to ICRC's site feeling apologetic, and their failed strategies of rephrasing that question.

Klaus, "During WW2, we helped civilians in Germany." It is probably partly true. Nazi soldiers too injured to fight were probably given aid, German citizens whose homes were blown up were probably fed and clothed. Maybe Klaus doesn't have to feel guilt when he reads that slide in our education, due to these things.

For me it feels good to have actually educated my fellow students today, who have been members for years, and somehow didn't ask.

And if I ever get a chance, I might ask him to re-write that one slide.

You absolutely did the right thing. I admire your courage to speak up. Well done.

Good for you in speaking up.

Karen B in so california said...

Way to go. Your actions are admirable.

I only have the ICRC and other reports, and Wikipedia. Do you have any more information?

Friday is our bi-monthly DRK meeting. If I have the chance, I will take our leader to the side and ask....especially if I have new information.

Here's an older article from the New York Times:
https://www.nytimes.com/1996/12/19/us/red-cross-admits-knowing-of-the-holocaust-during-the-war.html

Aarene, I included that first link in my post: ) The second one I am unable to access without membership to the Times. I assume by "red cross" they mean the ICRC, or maybe the American Red Cross?

Excellent job for speaking up! That is never easy. 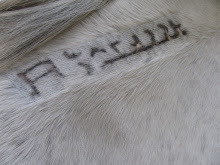