Over the river many times

We went back and forth between Tennessee and Arkansas because our hotel was in West Memphis (guess which state that's in?).

I was thrilled to get a photo of the welcome sign because it was my first time in a new state. Exciting! 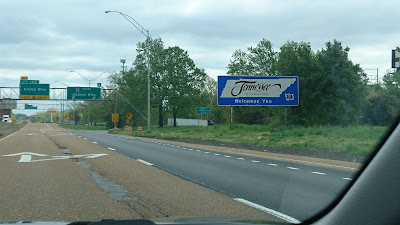 When I see an AC unit that looks like this, below, I can relax, I know it's gonna be cool enough. Of course it wasn't even Summer but this need became more and more desperate in our travels, esp on return to Europe. We actually left a hotel after sitting in the room a few minutes and realizing it was too hot to sleep in that room (Nurenberg). Also, this hotel in West Memphis had its own seating area for watching TV! I love having simply one comfortable chair, so I'm not forced to watch TV during the day from the bed. Yah, I watch a lot of cable TV in America because I'm fascinated by what is playing in America. Also just watching American news is fun for us. 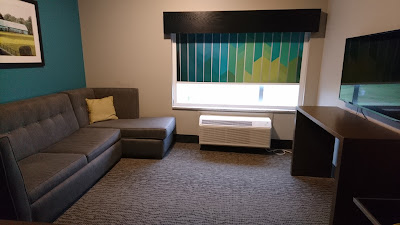 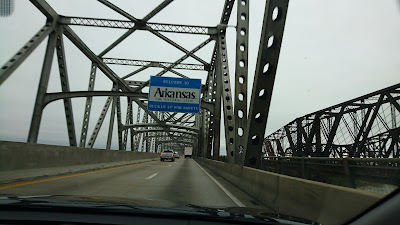 There was a reader board coming up that said SLOW DOWN TENNESSEE! I cracked up at the directness. I guess Arkansans are calmer people. 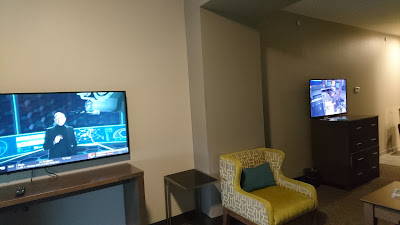 OK West Memphis we didn't need TWO TVs! I mean, what the heck, right next to each other? When checking out and asked how I'd enjoyed my stay, I said, "There was one completely unecessary TV that we felt compelled to watch simultaneously with the other TV." Haha. 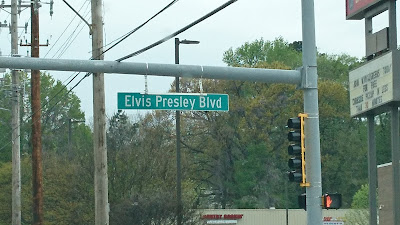 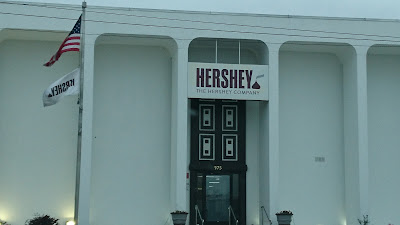 We found the Hershey factory on the river. The chocolate that Europeans love to hate. I appreciate Hershey for its practicality in making a S'more. 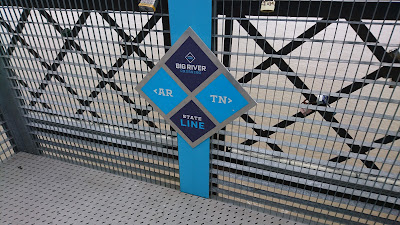 One of the things to do is to walk across the Mississippi river between the states. It's a car bridge, as well as a railway bridge, as well as a footbridge adjacent to the rail bridge so when a train goes by, you get to enjoy the thrill of the whole thing vibrating and you can look inside the train cars. There were LED lights on the footbridge that apparently make it into a spectacle at night, but we didn't see that.

I spent too much time taking photos and looking at train cargo on the way over, but on the way back, I timed it - it takes 20 minutes to walk across the Mississippi river. 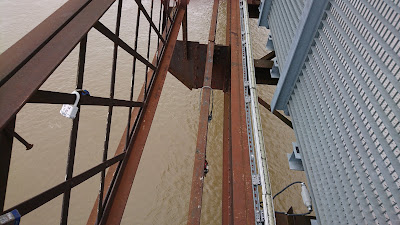 My main goal was to show you guys how muddy the water is. Wow that's brown.

Below, Memphis is on the right. 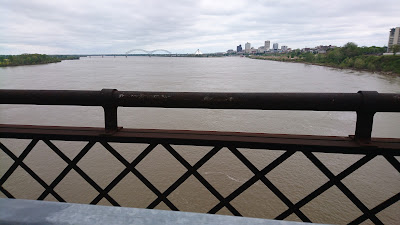 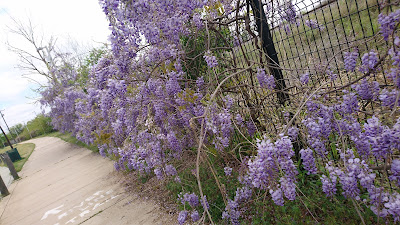 What a gorgeous wisteria! You can see how early it is in the year by the naked tree.

Below, Beale Street, which I believe is Memphis' downtown. There were street performers as shown in the Tom Cruise/John Grisham film The Firm, which I love, that do backflips and such. Most of all this is a 3 block-long party street with music blasting so loud from each club (and actual live band) I couldn't take it. We weren't there to party, only solve Geocaches. It's annoying to share a sidewalk with drunk people at noon, so, so loud. 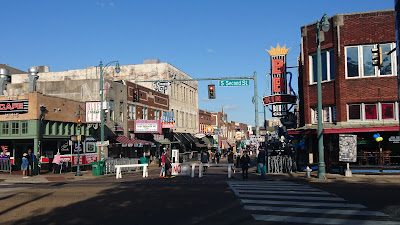 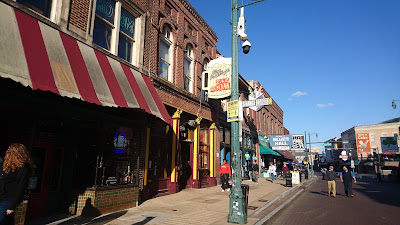 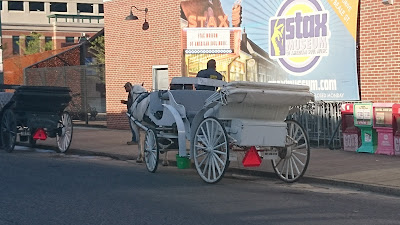 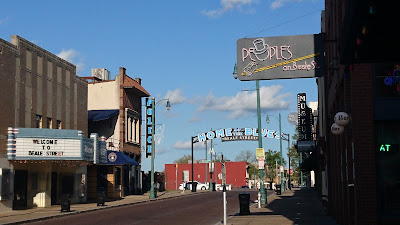 And then, based on Wolter's World travel guide, I knew we had to eat Memphis ribs. We went to Central, though locals will fight over which ribs are the best. 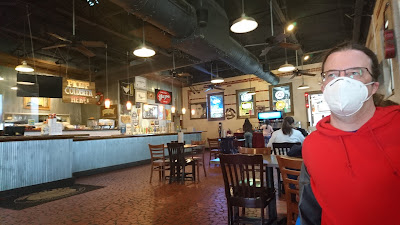 Again, like at Gus's Fried Chicken, I was surprised at the atmosphere of the place - it was yet another warehouse type restaurant intended to look as casual as possible.  We figured out we had to go to the booth on the left to order, and I simply said, "I want your most popular dish." "Ribs?" "OK."(Actually he said, something more specific like half-rack but I don't recall.) My husband ordered simple pulled pork. 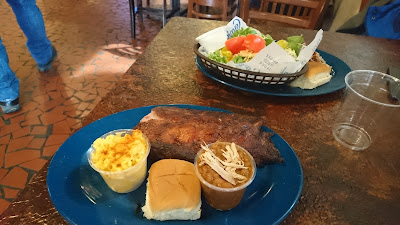 This is not a very appetizing photo, and to be honest, the food tasted exactly as it looks. 100% mediocre. The ribs were so, so dry. But I was warned, so I went to the BBQ sauce bar (a bar!) and got several cups of warm! BBQ sauce, that tasted just like Sweet Baby Rays to me, and later I did a taste test with my mom (we always do taste tests with each other, it's our thing) and there was very little difference.

In my opinion ribs should be juicy and your fingers should get filthy while eating them. These were so dry, you didn't need a napkin. I exaggerate, but only a bit. 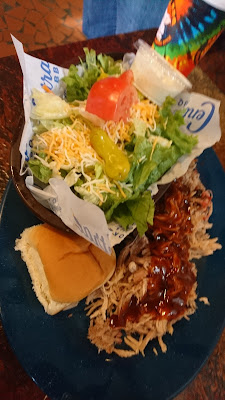 Not memorable, not recommendable. Serving food in plastic in a sit-down restaurant is inexcusable, but I enjoyed those baked beans simply cuz there are no baked beans in Germany. The mac&cheese was awful, only toddlers would eat that.

Then there was the deal of how to bring some of their BBQ sauce home (on the airplane, eventually!).

I had already filled a couple of little plastic cups full of my favorite of their many BBQ sauces, and I went to the employee at the register and said, "Can I get a couple of lids for my BBQ sauce cups to take them home?  I'd hate to waste them." He said, "Look" and pointed behind him to a mountain of little BBQ cups stacked, with lids on them. I said, "I don't want to waste what I have already taken, I just need two lids." (Despite this being my own language.....there was some gap of understanding.) He gestured again, "LOOK, take as many as you want." It wasn't penetrating his mind, that I didn't want to throw away food. I just need the two lids. In the end I was in the bathroom washing out containers in the sink. Then I filled them up with the sauces I had previously taken. (To be honest I'm not sure why I washed them out, maybe because I used the cups our beans and noodles had come in?)

If that is not an example of extreme German-ization of an American, well, tell me another *lol*

BTW, the sauce made the trip back to Seattle just fine, packed in my husband's shoes in our luggage.

To wrap this segment up, there was a heart-warming public sign for a beloved citizen of "Popeye town" Illinois. That would never happen in Germany. 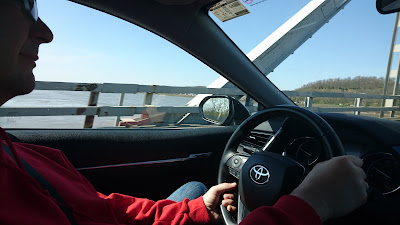 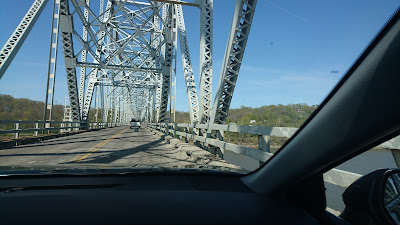 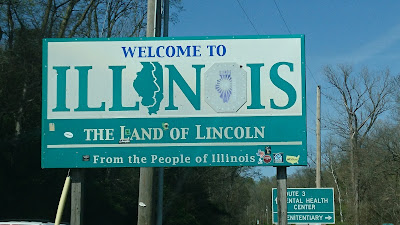 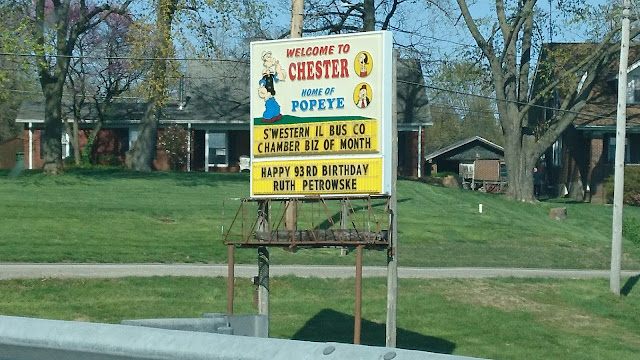 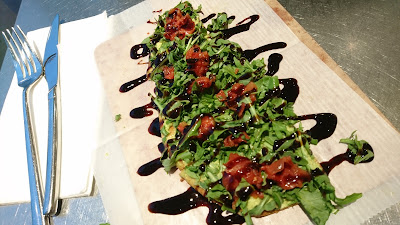 Back to St Louis, I was thrilled to find an airport eatery that wasn't just selling breakfast food. If you didn't know, I hate breakfast food. Then I found a little, empty place selling this awesome rucola salad on pita with balsamic before 10 AM. I escaped the loud airport and just sat there enjoying the silence, picking at my amazing rucula salad.

We do not yet qualify for an airport lounge with Lufthansa, despite our years of travel, and repetitive travel, we are only Gold members and not Platinum. We actually got turned away from one of their fancy lounges, how humiliating. My talent is now seeking out the most quiet spot in an airport. I recently found Sea-Tac's Reflecting Room where you can think about your faith, including an indication which way to orient yourself if you are Muslim. Total silence!!!! Then a couple of airline employees barged in, hoping to find it empty. OK we'll leave.

As of last week, I can save you the trouble, there is no quiet spot at the Tunis airport in Tunisia. Nope, nothing at all 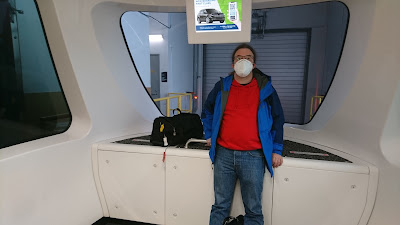 We have so much time to waste in airports. In St Louis, we rode this indoor monorail back and forth... 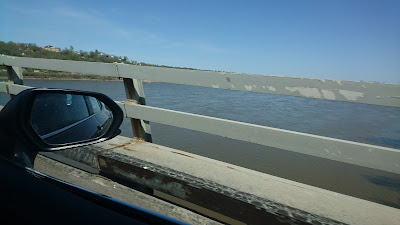 I think this is the end of our journey to America's Mid-West. Dipping into the South, far enough that I would be the only person in the entire gas station talking "normal" English while everyone around me treated me like a local, though they'd never seen me before. I had this feeling they all knew me. Wow.
Posted by lytha at 7:52 AM