Fun and fans and oops! at the Talsperre

The Talsperre (dam) is a lively place on a sunny Saturday and after I rode in the arena I was excited about taking Mag out there to experience so many different things.

As he ate his bucket I watched two girls grooming their mares, and enjoyed the peaceful atmosphere. I don't know their names, but they arrive only on weekends and only ride together and never at the barn, always out on trail. I've tried to sneak after them before, to see where they go, but they seem to disappear into the forest and it's frustrating.

I patiently waited as they brushed every hair on their horses' bodies, including the hairs on the fetlocks, as if they were going to Equitana (I've seen poorer groomed horses at Equitana, if you can believe it).

Everyone at this barn seems to dote on fetlocks, manes, tails, and the entire white line of the hoof. I just get the saddle area and call it good. For hooves, I obsess over the frogs but that's it.

I love this barn for the serenity of the boarders toward their horses. You never hear shouting or slapping. (Except from the barn owner...she doesn't believe in serenity.)

Finally they were done and led their mares out. I threw a second halter and lead on Mag and followed, but kept a careful distance so they wouldn't know I was tracking them. Not stalking, tracking.

Mag was thrilled, he sensed it. Just like Baasha, Mara, and Princess Buttercup, I think horses understand this game of mine and enjoy it. Around the corner there was a man in his garden standing inside his yard waste can, jumping up and down, trying to make room for more yard waste as his wife watched. Mag spooked, that's not normal! And the wife said, "Honey you're scaring that horse, what a beautiful horse!" When Mag's eyes pop out of his head and his tail flips over his back, it is something: ) The man smiled at us and waved, and stopped jumping up and down in the garbage can, and his wife grinned at us too.

OK where are the mares. Perfect, just out of hearing.

But we turned a corner and I didn't realize they had stopped to tighten girths and mount and they almost saw us but not quite and I told Mag to hold very very still, we are hunting rabbits. I even pinches his nostril shut and said, "DON'T BREATHE" *lol* He was fascinated.

One mare saw us for a moment but her rider didn't catch on, whew.

But then they were gone. Vanished. Like last time. WTH, how do they just disappear? We came to an intersection and I had no idea which way they had gone.

I led Mag down to the "mountain" to the bottom of the Talsperre.

At the bottom I found a tree to tie him to and did so.

I was somehow too insecure to leave him tied, so I went to the end of his 2nd rope and sat down on the wet moss.

He paced around a little but it was the perfect spot, he couldn't circle the tree, and he could nibble on the beech branches all around him.

People walked over the dam and Mag stared up over our heads at them, yes, that is why I'm leading you here and not riding you here, it's freaky to have people so far above our heads.

He started looking at the decorative fountain beside us and I saw a couple of people had arrived with a wheelbarrow and some other tools.

Finally I said "You're good" and I untied him and led him back up.

As we reached the top, panting, a man approached us with an e-cig and said, "Can my children please pet your horse?" I said, "Yes, but only through this fence." The fence that is the barrier along the entire dam, to keep people from falling to their deaths. It was perfect.

The girls ran FULL GALLOP to us. The mother said, "Hey, hey, not so fast" And the two girls were beside themselves with joy, and the mother said, "You don't run up to horses!" I agreed with the mother. This is why I had Mag behind the wall/fence.

Mag was fine with the kids touching him all over his face. Naturally, he wanted treats from them, but it's been a while since Mag has received a treat, due to his tooth. The girls were safe from being stepped on, behind that fence, I explained to their mother.

The mother said, "When I was a kid, the fattest horse in the barn stepped on my foot, and did not bother to move!"She said she loves horses but they are so dangerous, she hopes her daughters will grow up without needing them. I said, "Dangerous and expensive. Better the kids find something else, I agree."

Then the kids started telling me Every Single Thing they have ever learned/read about horses. And since it was such a great training spot for Mag, I listened to every word.

"Why is it, then, that you cannot approach a horse from behind?" I asked

"Why from behind and not the side?"

"Cuz they cannot see well behind them!" one shouted triumphantly.

One of the girls said, "I want to be a horse. I think horses are better than people. I wish it so much!"

The girl said, "Cuz they are so beautiful, and so FAST, they can run faster than anything."

I said, "If you were a horse, you'd have to work for people. And you'd never have the choice to decide what to do, you'd be forced to do what people wish."

She seemed troubled and said, "I don't know, but I still want to be a horse."

I told them, "If you love horses, really love them, you will have one someday. You just might have to wait til you're grown up."

This is the same speech I've given many little girls over the years.

The girls said goodbye to Mag, "You are so beautiful!" and I admit, I showed off a bit, I jogged out of that area with him behind me. In retrospect I shouldn't have done that.

Suddenly there was this dun horse in front of us, with a rider pulling him up. She said, "Is your horse in heat?"

I smiled at her, glad to not have to say anything.

I turned around the corner and jogged up the hill with Mag, who ...I have no idea....leaped into the air, joyfully? belligerently?  throwing a foreleg over his rope.

I am not quite sure what happened cuz he was behind me. I believe I saw him leap and strike and then suddenly I had no lead line in my hand.

Here was Mag, jumping around me, me, with no line in hand, and he was not quite sure he was loose, but he definitely wanted to go see that dun horse down below.

I begged him to stop, then caught the rope. I asked him to yield his hind end to me a few times and circle, and back. He defiantly reared up slightly but I had him in hand. I think after the kiddie break, and then the excitement of that dun horse, and me looking at the time and rushing off, he was just overly enthusiastic and unlike him, jumped up into the air.

Finally bikes went flying by us, something I'd hoped for all day, for training.

Almost home this lady was smiling at us as we approached her. She would not quit smiling, like an American would do.

I grinned at her, nodding, and looked over my shoulder, to see Mag walking along normally, perfectly calm.

I was ready to be done, after almost losing him. But I can't stop thinking about those little girls.

I hope they can give up on their dream. If not, I promised them its fulfillment. I had to wait til I was grown up to have a horse. To wait in agony all those years, I appreciate it so much more. I would never wish "horse crazy" on any kid. 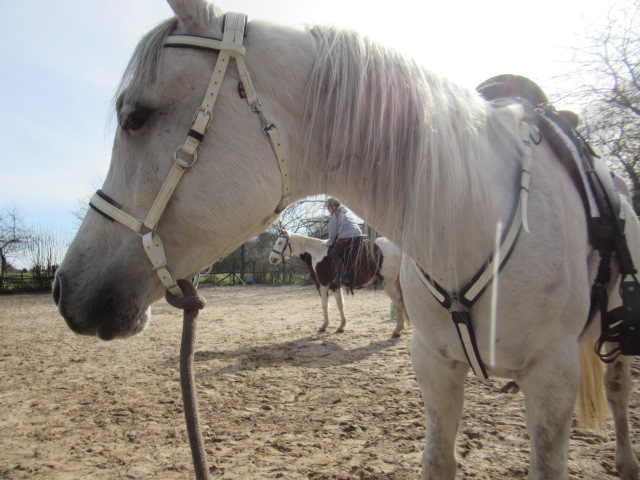 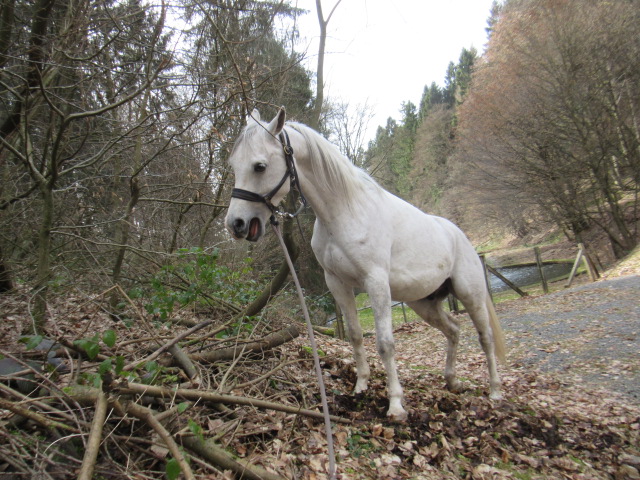 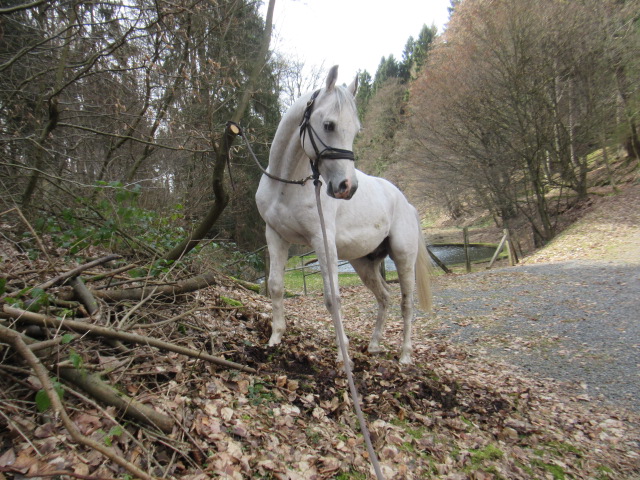 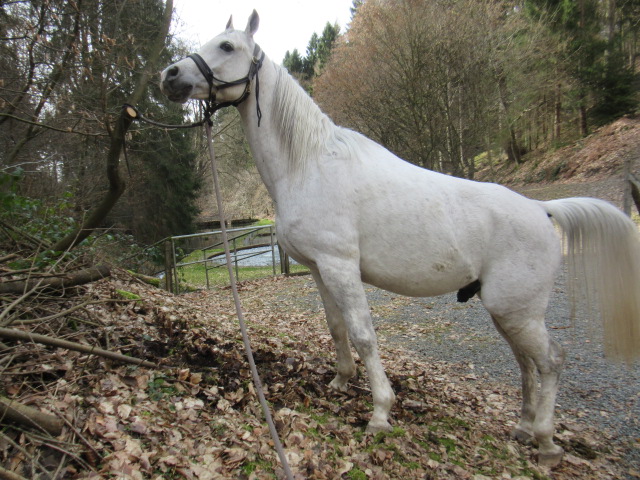 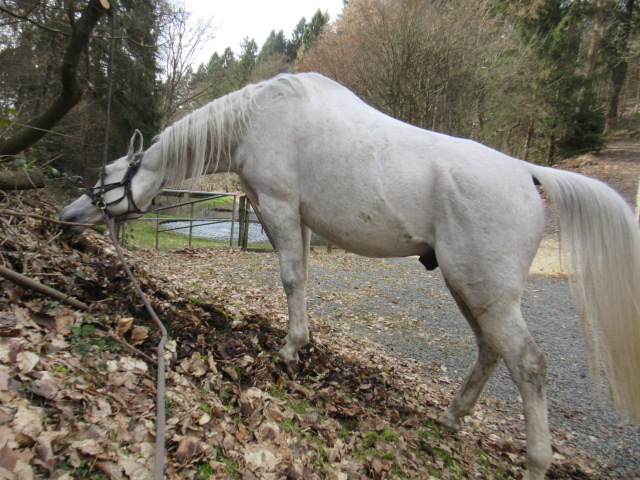 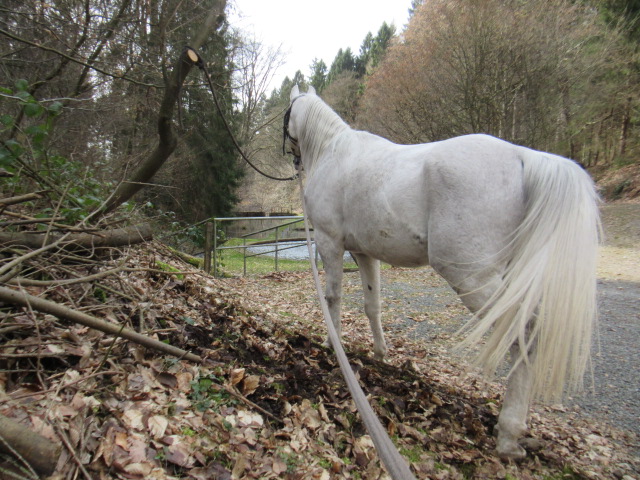 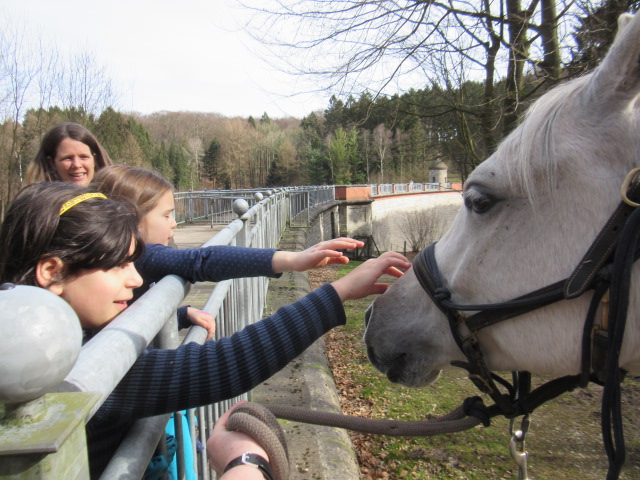 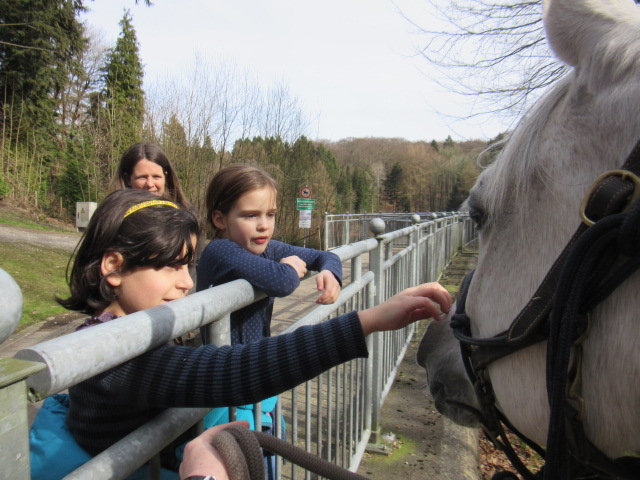 So beautiful, I can understand the fan club. If those girls already know so much, they've already been bitten. Especially the one that plays horse lol. Yeah, I was approaching my 50th birthday before I finally realized my dream. You have me wondering where those girls disappear too?

Oops, indeed. And yet you both did well. So that's just fine!

I secretly want one of those flying robot cameras to follow you around and take pictures of Mag out on the trail. :-)

Such a great day for Mags but I bet that the girls enjoyed it more. :)