BECAUSE OUR PLANE BROKE.

We get on the Airbus 340 and I can tell something is wrong. The plane is not accelerating as it should.... not roaring in that initial push. Time passes and all the flight attendants are just sitting in their chairs, way longer than normal. Why aren't we climbing?

Imagine how it felt for us when the pilot announced, "Sorry but our landing gear has malfunctioned. We are going to dump our fuel and circle back to Frankfurt."

It was one of those times in my life where I'm sure I'll die and I get very calm, "So this is how I go."

Then the pilot repeated himself in English, and explained in a less-panic-inducing way, "Our wing flaps are stuck in the landing position and we cannot gain altitude." Whew. (But still, I suspected he was lying to us and we'd find out on landing.)

We circled and circled, dumping kerosene on the forests and crops.

The video readout of the flight showed our path, it was super frustrating to know we're not going forward, just circling til landing where we began. We'd already missed a plane due to a late train so we were bound for Denver, not Seattle, and  there was a pregnant girl puking two seats over. Later we found out they had a cat! (And I said, "He had a worse day than the rest of us!"

The readout on the flight video saying FRA-->FRA was just funny. That never happens. Usually a plane goes from one place to *another*: ) Then the captain announced, "Don't be worried when you see lots of fire trucks and ambulances on the runway when we land - that's just procedure." (That didn't help calm us down!) 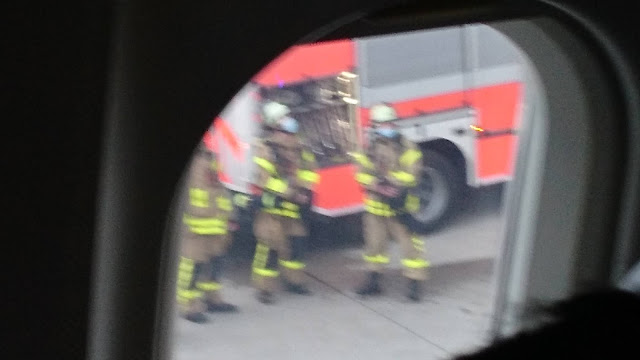 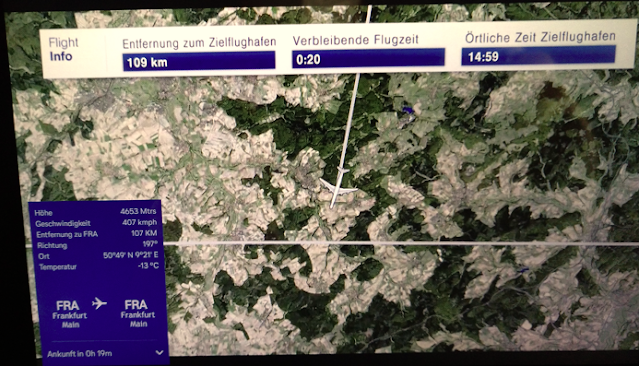 You can see in the photos above how the plane is circling around and crossing its own path. That's not normal: )

We landed fine and then they spent the next hour trying to fix the plane, with us still on it. That's a first for me. They opened up the doors of the plane so the flight attendants could watch the progress. In the end they couldn't fix it so we had to get another plane.

That took a while and by then I'd entered that zone of apathy in travel where you just blank out. And we were still in freaking Germany.

Finally they put us on another plane to DEN and as usual it was abysmal, oh, but guess what - it's an even longer flight to Denver than Seattle! Who knew!

The airport region of Denver is the most desolate place on Earth. Even around the edges of the lakes there is not a spec of green. 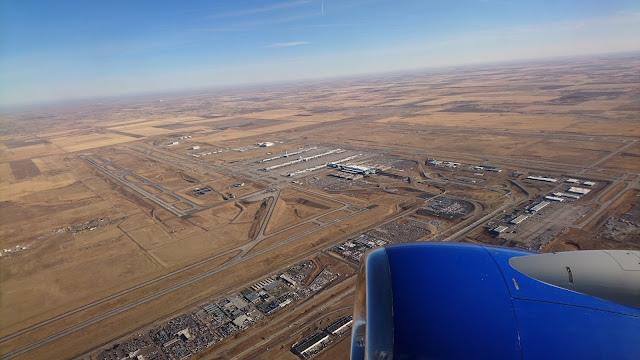 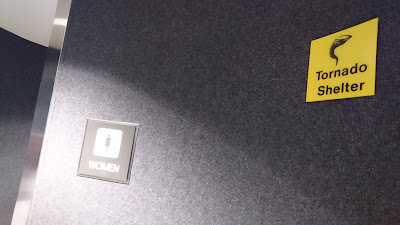 That they have tornado shelters at the airport is another thing. 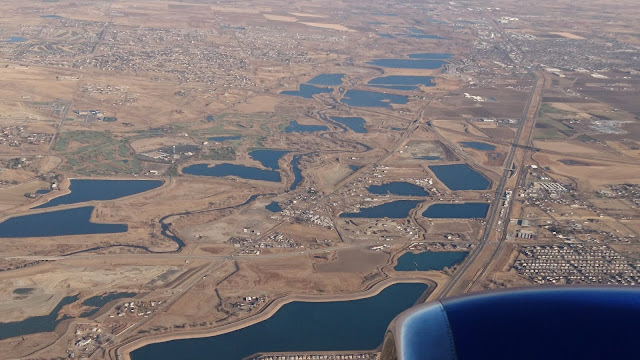 Before arrival they assured us they would be giving out hotel vouchers. HA. That sounds so nice, so simple. Nothing about it was. It took *hours* for us to get those vouchers. Our "Broken Plane" group had whittled down to about 13 because so many others had lost patience and just gotten out of there.

They finally found a hotel with room for 13 and got us a shuttle. I remember waiting for that shuttle in my airplane clothes (very light) in subszero weather.

We got to the hotel and got a room at 2 freaking 30 AM. Guess when our flight to Seattle was? So early we would only have TWO HOURS to sleep in that hotel. When we realized that I just about lost my mind. I said it's been too much, I'd had enough, and I need to just stay in a hotel a full night and day and recover from that nightmare.

But by the grace of God we woke up 2 hours later, from jet lag, and were ready to go. We caught the 4:30AM shuttle back to the airport and started the horrible last 3.5 hours of our journey.

Of course we were both delerious by this point, beyond apathy in a grey swirly place.

The Washington state license plates on cars that normally make me happy and feel so at home were pale.

We arrived in Seattle around noon and as soon as we got to my parents' house I got out a piece of paper to figure out how long it took us, with the time differences figured in.

37.5 hours. Have any of you had worse luck, and travelled even longer from A to B by plane?

Here is a video of the start of our journey (well, the start was by car....) at the Cologne main station, where our train was late, causing us to miss our direct flight to Seattle. BTW, the airline partners with the trains so it's one single booking. The train to airport is included in the flight as if it were a transfer.

Travel , while necessary at times, is highly overrated.
I will never board another plane. If I cant get there by driving, I don't go.
Sorry you had such a miserable trip; at least you arrived safely.

That's terrible! We were trying to get to Vancouver one time and on approach they decided the airport was too foggy, so they diverted to another city and tried to land. Did such a hard bump off that runway because they misjudged the ground that we were still in the air at the end of the runway and they had to do a scary climb out to avoid buildings. They tried again, couldn't land, so off we went to another city! Circled that city but the runway wasn't long enough? Got partway back to try again at home city and they realized they didn't have enough fuel. We returned to original airport, emergency, no fuel, many hours in the air, so much stress, and off the plane back out into the same airport we left, all flights to PNW now cancelled. I was so anxious about the whole thing we took 2 more days off work and just drove home :) Glad you made it safe and sound, but I am sorry it took so long, that's really awful.

It took me 4 days to get from Luxembourg to Seattle back in...1980? There was an (American) air controller's strike on, and it mucked up every airport on the planet. So we leave Luxembourg at, I dunno, 8am.

Travel backwards through time and get to Kaflavik (Iceland) because I was a student, and broke so flying Icelandair, which only owned 4 planes and they were 707s that had to stop in Iceland to refuel. Land in Iceland and there we stayed for a day and a half, no hotel because that didn't exist (see above re: not much money, plus also Iceland), I would have slept in the airport except it was August and the sun didn't go down. They took us on field trips around the entire country (it took most of a day) to keep us busy but they wouldn't let me pet the Icelandic horses because they bite. We also saw a lot of geysers and that statue of Leifur Eiríksson (Leif Erikson) in Reykjavik. We couldn't leave Iceland until there was a guaranteed landing time in New York because 707s don't have enough fuel to faff around.

Finally get in the air from Iceland and head to...Boston. We circled Boston for a while (2 hours?) until apparently the pilots told the ground that we were gonna run out of fuel, so they shoved over and made room and let us land...and it was about midnight and finally DARK, but also no planes out of JFK to SEA until morning. Another "night" on an airport floor (I was 16 and could sleep anywhere as long as it was flatish and dark-ish). And then up in the morning to negotiate with airlines to finally get a flight home and landed just before dark (in August, so...10pm?) in Seattle. No extra meal vouchers, no hotel. I ate almost all my chocolate and splurged on a terrible hard boiled egg in New York (how can you wreck an egg??).

I prefer travelling by train, but those aren't foolproof either--I got stuck in Whitefish Montana most of a night because a freight train hit a bridge. How does that even work, aren't they on tracks?

Glad you made it safely, give me a call when you can.

S, I wish I could say I'll never board another plane. Sadly I'd never see my family again. My fault, I know.

T, no way, two, no three attempts? That should not happen.

Aarene, two nights in two airports? Good that you were a young thing at the time: )

1. Only buy direct flights.
2. Only take (car) to train to Frankfurt to get to that direct flight to Seattle.
3. If train is late, no worries we say in the craptastic Frankfurt hotels at the train station/airport.
4. Decide whether going to Seattle is actually worth it, or not.

JK.
Almost.
That FRA airport hotel has no AC and in March (!!) we were burning up.

I'm collecting Ferry tickets just to prove at the end of this trip how many times we've taken the Wsahington State Ferries across the Sound. Today was our 7th.
I'm driving a truck that is a large Deisel Cummings that is very loud and incompetent and I have to jump out of the truck each time I buy a ferrry ticket cuz the window doesn't work.

They actually know us by now, as does the Good Will in Shelton.

You know I've taken my horses on the ferries. But this truck is so long I cannot see over the hood as it peaks the side ramps of the ferries, which is unsettling. Or, was, teh first 5 times. *sigh* IT's so loud, you wouldn't believe it. I actually disturb other cars and trucks on the freakind road.

If you're in Shelton, nobody notices a loud diesel engine, I promise! :-)

Quite the journey! I've been blessed with great flights across our fine country & beyond.