Nearing the end of our visit

It's hard cuz our trip was again about family difficulties, and I'm glad to say I feel well with both members who are not so young. Mostly because they are both beleivers. We'll go back in November, every chance we get to be with them. It was both overwhelmingly stressful and satisfying, if you can imagine.

Let's have some pretty Seattle pictures! 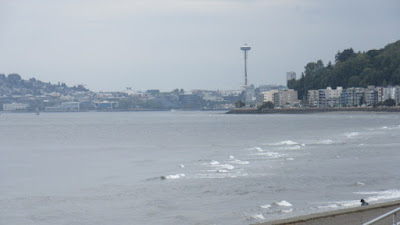 Alki beach in West Seattle in choppy water. This is the perspective my parents and grandparents gave me when they let me collect shells. 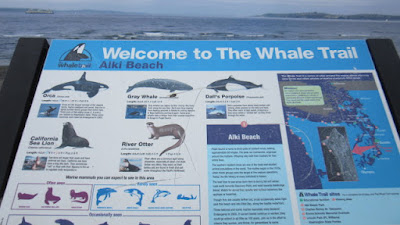 It is awesome to live in Seattle and have the opportunity to these animals when you take the time to look. 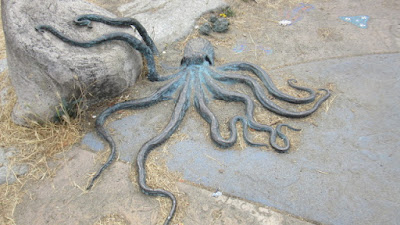 West Seattle park, a geocache asked us to find this. 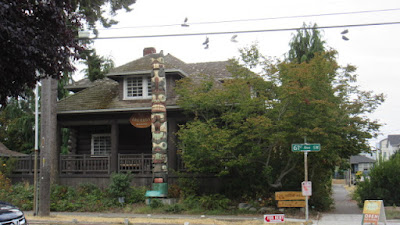 And this, the log cabin museum on Alki but we didn't have our masks so we couldn't go in. 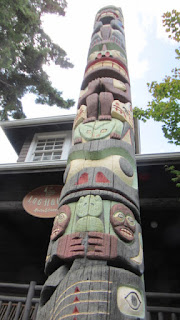 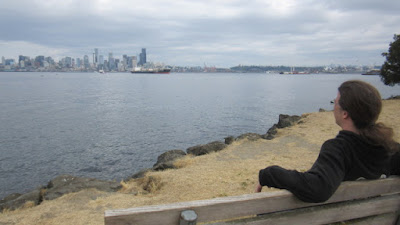 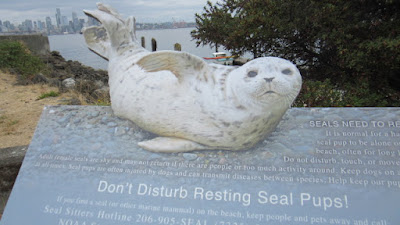 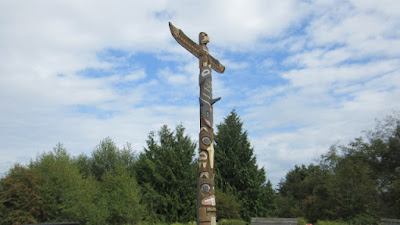 This totem pole has a funny story; I couldn't believe it. It's always been there, in West Seattle. Until it wasn't!

This dude decided he wanted this totem pole for himself. So he hired a crane, telling the operator/owner he is an art restorer. Getting it out was rough, and the semi got stuck in the mud of the park.Partially blocking the road, the police had to come and divert traffic. I get a kick out of the fact that the police played a role in its theft. The guy got away with it until eventually people started asking questions. It turned up in Oregon and the guy only had to pay 20,000$ restoration costs, plus the return of another totem pole. 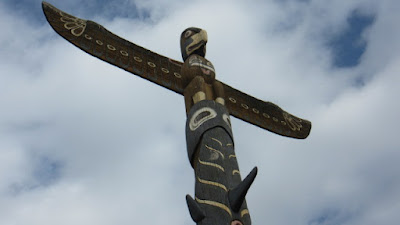 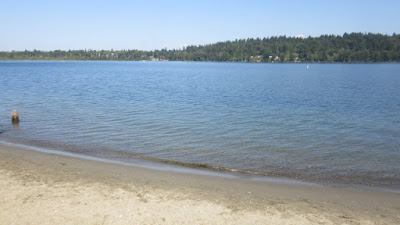 This is Lake Sammamish, near my sister's house .I had to rush out and touch it, it was warm 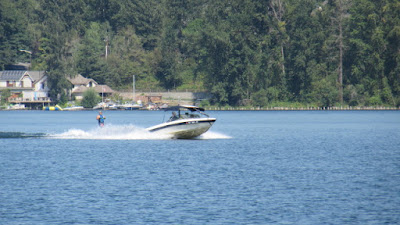 The people of Washington state know how to enjoy the water they are given. Most lakes seemed open to recreation or at least fishing. 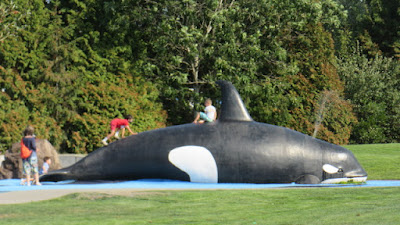 There's a park in Bellevue that I thoroughly enjoyed beause of the Heat Dome. It has several sea animals that spray water randomly. There's also a sunken boat with a plaque that we needed information from to solve the geocache. I liked the boat, but I really liked the random spraying water animals. 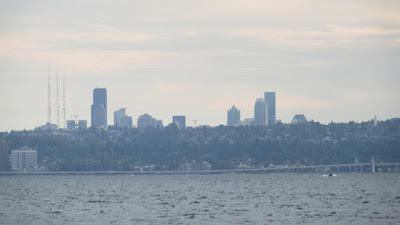 A few days later we visited Kirkland, WA, on the other side of Lake Washington from Seattle. 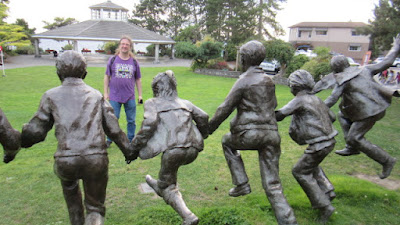 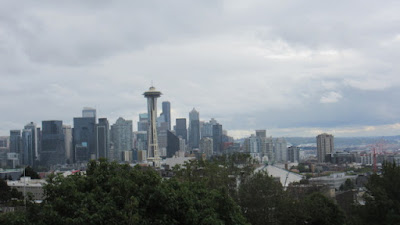 The favorite photography shot of Seattle is from Kerry Park. On a good day you'd see Mt Rainier on the right. It's a strang perspective, the buildings all squished together and the Space Needle looking taller than them all.

On a good day: 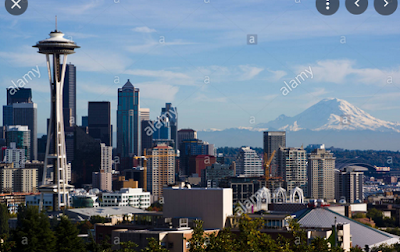 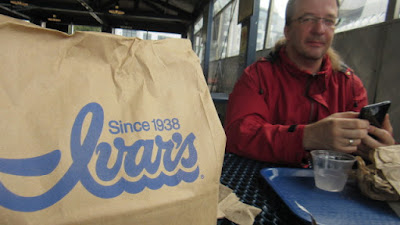 One of Seattle's dearest seafood restaurants, Ivar's actually encourages us to feed the seagulls (but not the pigeons, that would be unnatural *lol*). Ivar's isn't the very best seafood in Seattle, but Spud had a line going out the door. Actually, it always does. 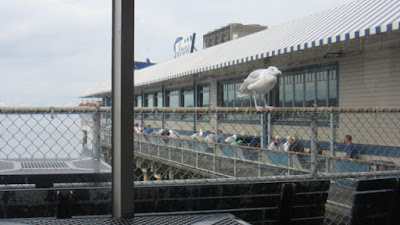 The seagulls just wait and everytime someone cannot finish their chips, they feast. Very very loudly. We were sitting in the glassed-in area, all those other people are out there over the water, very brave people. 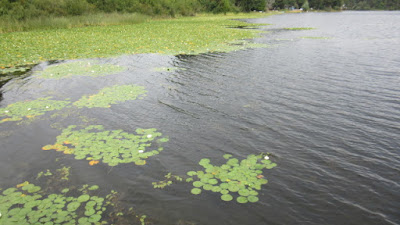 My sister lives by two tiny lakes too, this one is called Phantom lake because of the eerie mists that rise from it. We sat on a dock all alone and enjoyed the sound of the water. Eventually we were joined by a family with two little boys and all of them were putting worms on fishing hooks, preparing to fish. We gave them the dock. It was a poignant moment for me to remember how much water is a part of the life of everyone in the PNW. Using that water every way you can invent. Those little boys will grow up with the yearning to be near water if ever parted from it. 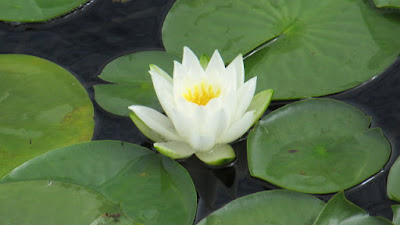 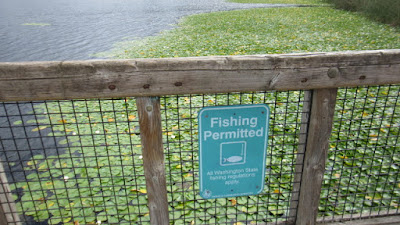 Now I have to share a video of my very first time in Seattle's new tunnel. Seattle had a viaduct along the waterfront, between the skyscrapers and the water, my entire life. A double-decker highway that I drove every day to work, enjoying the view of the water and the mountains to the West, never ever taking it for granted. Well, someone decided to tear it down and replace it with a tunnel, in the interest of making the waterfront more ...quiet? I don't know. My sister was so kind to us, she took us for a tour of downtown in her Tesla and we saw everything we didn't see from my uncle's little boat. The tunnel was sterile and strange, and costs money to drive through! I was most interested in what is going on on top of the tunnel where the viaduct was. At the moment it's still a construction zone. J and I speculated that they would move the main waterfront street to the zone, and leave a huge open area for walking along the water and the piers, more than the sidewalk that exists today.

We'll be back in November and we will be down there again, I really want to take the virtual ride Wings over Washington (is that what it's called?). I also want to eat oysters.

Some wonderful scenes and memories. I was only in Seattle once and the big city vibe was too much for this country girl. But the lakes and waterways there sure are pretty, and lots of innovative art work.
I hope your November visit goes well. It is so important to spend time with our elderly family and friends.

Shirley, I'm so glad you wrote. I know you're a Christian. It helps us so much as we observe my father who reads his Bible several times per day, and my step-father who trusts God and prays at every meal. Such a refreshing thing after being in Germany where even believers do not take such actions. My dad has a Bible in his bedroom and in the living room, in case he needs to look something up. How cool is that: ) I wish so much I could talk to him and he'd remember what we talked about, it is heartbreaking. He loves conversation, it's fun to talk with him, and he is polite even in mental and awful physical distress, but he won't remember anything the next day. It's so hard. As much as I wish to be with him a lot, I get wiped out after a few days. I prefer to be a caretaker of people I am not related to: (

Are you ok? Just checking since I hadn't seen any new posts. I hope you and your family are ok.